A friend (h/t to Grog) reminded me about a situation that I seriously doubt was brought to national attention by the legacy media. I could be wrong, since I haven't been connected to any form of television broadcasts since 1987. Yeah, 32 years ago. No satellite, no cable, no rabbit-ears. (Just a plethora of dvds to watch.) So, I acquire my news via the Internet. Not all of my sources are conservative web sites and blogs, but probably 90% of them.

Got your tinfoil hats on? Here we go: are you able to consider for a moment that this may be biological warfare perpetrated by private (NGO) parties? Do you really believe that a large group of illegals from the Congo just happened to arrive in Mexico south of Del Rio, Texas, all by themselves, crossing over into the U.S. at that location? Do you imagine they were allowed - with or without passports - to board commercial aircraft to fly to Mexico or Central America? Hundreds of them in one group?
What if someone with a lot of money - or the people to whom he _gave_ a lot of money - chartered a jet and loaded these hundreds of African illegals aboard? If some of them are carriers of the Ebola virus, they could infect a number of the ICE agents who process them, said ICE agents then infecting co-workers, family, friends, and/or a number of people encountered in shopping at Walmart, etc.
It wouldn't be long before ICE was no longer able to carry out its job. In addition, since the incubation period is roughly 21 days (three weeks), it could happen that a lot of folks would be infected in the first two weeks before definitive symptoms set off alarms and the beginning of an epidemic.
Think about it. folks. This isn't conspiracy theory we are talking about. It is a look into the risks, the rationale, and the possible outcomes of SOMEONE providing long distance transportation for a group of hundreds from a country with an Ebola presence and epidemic.
Posted by Reg T at 8:57 PM 14 comments:

I have posted on the Left's attempts to normalize pedophilia before. They did it fairly quietly, with some discretion, and tried to be as "tasteful" about it as is possible with such an anti-human perversion.

After making a post a few days ago on Facebook about this topic, I ran into a horrible new effort to make pedophilia appear to be "fun". Evidently, Fox is showing a "comedy" series that includes a supposedly Tranny young boy wearing a bondage gag. Evidently, they have him dress in drag at times, making comments about the dress making him "feel breezy on my vagina". 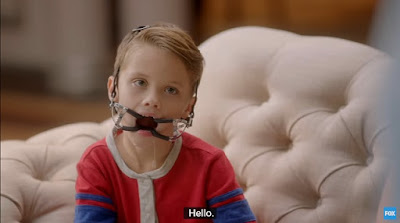 This is sickness, people. Don't think for a minute you can accuse me of forcing my Christianity upon you, because I am an atheist. The Left loves muslims, not because they are sweet, loving people, but because islam encourages a wide spectrum of perversions, from raping young girls to sex with young boys. They don't count pederasty (sexual activity involving a man and a boy) as homosexuality, because the boys are young, usually pre-pubescent. They are called "bacha bereesh" - "beardless boys", and they sex is called "bacha bazi" - "boy-play", where they are dress as girls or women, and used for sex by the male muslims who arrange and participate in these "parties".

Imams in Afghanistan - where bacha bazi has been increasing in recent years - complain that there is nothing that they can do about it. I call bull shite. If it was homosexuality between adult males (as opposed to pre-pubescent boys), they would condemn the participants and throw them off a roof. If it was a woman who was the victim of rape, they would accuse her of "enticing them" (the man or men) and stone her to death.

The truth is that many imams participate in bacha bazi themselves (in Afghanistan, anyway). They have no desire to stop it. If they posted a fatwa saying that anyone participating in bacha bazi would be stoned to death - and then actually did stone some who engaged in it - it would shut down most of these affairs.

Do you doubt muslims engage in bacha bazi? Are you familiar with the former Supreme Religious Leader of Iran, the Ayatollah Khomeini? He wrote a two-volume book on proper conduct by muslims, called Tahrirolvasyleh. Here are some excerpts:

A man can have sexual pleasure from a child as young as a baby.  However, he should not penetrate vaginally, but sodomising the child is acceptable.  If a man does penetrate and damage the child then, he should be responsible for her subsistence all her life.

Of course, what isn't said here is that "subsistence" means exactly that - being kept alive at the lowest threshold possible. Barely fed, worked like a slave, beaten and abused by his wives, and used by him, and anyone he permitted, as a sex slave, to be raped and otherwise abused by whoever was allowed to use her. The child's only hope being that she would die before too many years had passed.

Here is another excerpt:

If a man sodomises the son, brother, or father of his wife after their marriage, the marriage remains valid.

What a prince! Khomeini allows sodomy with relatives, and the wife cannot divorce the husband or claim the marriage had been violated. But wait! There's more!

A man can have sex with animals such as sheep, cows, camels and so on.  However, he should kill the animal after he has his orgasm.  He should not sell the meat to the people in his own village, but selling the meat to a neighbouring village is reasonable.

What happens in Kabul, stays in Kabul, I guess. No need to tell the neighboring village that the animal comes with a "secret sauce".

It is better for a girl to marry at such a time when she would begin menstruation at her husband’s house, rather than her father’s home.  Any father marrying his daughter so young will have a permanent place in heaven.  [“Tahrirolvasyleh”, fourth edition, Qom, Iran, 1990]

So. Pedophilia is a permanent, encouraged part of islam, and all muslim males are given the right - and often the command, as written in the qur'an - to participate in all manner of perversion, with the blessing of "allah". Is it any wonder the Left loves islam? That it encourages and aids in the admission of hundreds of thousands (several million at this time, I believe) of muslims to our country?

Certainly enough of them, such as the Somalis in Minnesota and Michigan, to start electing their own kind to Congress. Representatives who swear upon a qur'an, swearing an oath that they immediately violate, with no consequences. Who openly admit they hate America, but are allowed to continue, even to the point of being given a seat on the House Intelligence committee as a _freshman_, first year of their first term in office. A committee where they are granted access to secret information that they can (and I'm certain they do) pass on to their friends (and handlers?) in CAIR, and the muslim brotherhood.

The Left wishes to break down and do away with the Judeo-Christian moral code. This disgusting TV series being shown, with liberals/progressives encouraging their own children to watch, I am sure, is designed to move our society away from decency and into perversions that may one day completely displace decency, moral behavior. We conservatives, and even liberals who still hold good, moral principles and behavior as a part of our country, our society, our tradition, need to make it known to Fox that vile trash such as this series needs to be stopped. At the very least, they should turn to other channels, or - heaven forfend - stop watching TV at all.